The France of the Great Writers

France has inspired writers dating back to Roman times.

This tour, which spans the three most beloved regions of France, is designed to take you back in time to soak up the atmosphere, museums, boardwalk strolls, literary haunts, and the spirits of literature’s greatest talents and France’s best artists.

Send to a friend

After checking in at your leisure at Hotel Beau Rivage, a 4-star boutique hotel in the center of the old town of Nice, enjoy a rest in your room or stroll along the iconic Promenade des Anglais and gaze out to the majestic Mediterranean Sea, a few feet from the hotel.

At 7:00pm, meet your travel mates in the hotel courtyard for a welcome drink before heading out for dinner at the iconic Negresco hotel, where Chagall, the Beatles, and Grace Kelly once stayed.

This morning, you will discover the hidden secrets of some famous writers’ haunts in Nice. Then, you will head up to the charming ancient hill town of nearby Èze where you will enjoy a leisurely lunch before exploring the incredible Villa Ephrussi, a Rothchild mansion, and its magical gardens.

You will return to Nice in the afternoon for some rest and relaxation before having dinner at a gourmet local treasure, Le Sens.

Today is dedicated to St Paul de Vence, where you will walk in the footsteps of artists and writers such as James Baldwin, who spent the last 7 years of his life writing in a rental home perched in the countryside here. You will be welcomed by the Foundation established in his memory, and you will have a chance to meet some of its writers in residence.

Lunch will be at the iconic Colombe D’Or, where you can peer around at the paintings of Picasso, Leger and mobiles by Calder. You will learn the whole story of this legendary hotel and restaurant while on site.

You will then head to Grasse, the flower and perfume capital of France, to enjoy an initiation tour of the Fragonard perfume factory. Afterwards, you will have tea at Belles Rives where the Fitzgeralds stayed back when it was a private villa.

In the evening, you will enjoy a scrumptious dinner at Le Bistro Marcel, a place that feels as if you have stepped back in time to the 1920’s.

On your way to Arles, you will stop  in charming Aix-en-Provence, where Peter Mayle enjoyed people watching while having a café on the Cours Mirabeau. A light lunch in the courtyard of the Caumont mansion and art center will be followed by an audio tour. In the afternoon, you will visit Cezanne’s atelier up in the hills, where everything is still intact.

Then, you will head to Arles, which was Van Gogh’s home in the South of France as well as home to a number of writers including American poet and novelist Jim Harrison.  You will be staying in the 5-star Jules Cesar Hotel, which was decorated by haute couture fashion designer Christian Lacroix. Upon arrival and check-in, you will have time to go to the spa or relax by the pool.

Dinner will be at the casual Mediterranean bistro Le Criquet.

This morning is free for you to discover the glories of the outdoor market right outside the hotel. It is one of the most interesting and vibrant markets in the south.

After a light lunch, you will meet a writer in residence at the outstanding Luma Foundation in Arles, designed by none other than architect Frank Gehry!

In the evening, you will enjoy dinner at the artistic Arlatan, which is belongs to the owner of Luma.

Today will start with a tour of French Provençal writer Frederic Mistral’s home, filled with original items celebrating his life, friendships and other surprising encounters. You will enjoy lunch in the vineyards of a family-owned mansion, where you will be welcomed by the owner who will share their passion for the wines of Provence.

On the way back to Arles, you will meet two women who produce some of the best olive oils in the area, followed by a photo stop at short story writer Alphonse Daudet’s windmill, his favorite spot and the inspiration for writing his short sentimental stories about provincial life titled “letters from my windmill”.

Today, you will leave to South of France aboard the TGV train to Paris. You will enjoy a light lunch on the train as you look out over the dreamy fields of France.

On arrival in Paris,  you will check into the sumptuous Hotel Monte Cristo, which is designed to resemble the home of the author Alexandre Dumas. (It also has a rum bar and an indoor swimming pool which are both welcome after a day out and about!)

The hotel is situated in the heart of the Latin quarter, the oldest in Paris, home to a Roman Amphitheater as well as the ancient Sorbonne University and dotted with spirited cafés where the likes of Hemingway, Stein, Sartre, De Beauvoir and Picasso, and others would rub shoulders.

You will go on a walking tour of the area, exploring the haunts and colorful anecdotes of Hemingway, Henry Miller and others. You will also visit the Pantheon which is the stately and impressive resting place of Victor Hugo, Dumas, Rousseau, Voltaire and Zola.

Tonight, you will dine on traditional fare at Le Polidor, which is one of the oldest bistros in Paris. You might also remember it from the movie Midnight in Paris, as this is here that Gil meets Hemingway for the first time.

Today, you will explore the glory of the right bank of Paris. In the morning, you will visit Opera Garnier, the crowning jewel of 19th century architecture. It is the setting for Leroux’ Phantom of the Opera.

Afterwards, you will stroll over to the nearby Museum of Romantic Life, which is tucked away from the busy streets. The museum is in a private free-standing house whose owner hosted cultural soirées where he invited everyone from Ingrès, Delacroix, Liszt and Chopin and his mistress, the author Georges Sand. There is a lovely collection of watercolors and memorabilia. You will enjoy lunch in the delightful courtyard café which is run by the delicious Rose Bakery.

In the afternoon, you will explore the Palais Royal. The serene garden which will be showcasing its autumnal flora, has a rife history of gambling and debauchery, but also elegance and creation. You will have a seat on one of the benches, maybe with a little coffee, while revisiting the history of the famous residents of this square which included Colette and Cocteau.

Dinner is at the legendary brasserie La Coupole, a favorite art deco haunt for writers and artists in the roaring twenties.

Today, you will explore the vibrant neighborhood where Victor Hugo’s house is situated, in the incredibly regal Place des Vosges. You will meander through the narrow streets, which have some of the best shopping in Paris, before having lunch at a lovely café and bookstore, La Belle Hortense.

After, you will wind your way past Notre-Dame to the fabled Shakespeare and Company bookstore. The original Shakespeare & Co is where owner Sylvia Beach lent books to Hemingway, and edited, retyped and published Ulysses for James Joyce in 1922. The more recent iteration is the love child of the eclectic George Whitman, now run by his daughter. It is one of the most unique and incredible English bookstores in the world.

You will then stroll along the Seine towards the heart of Saint-Germain-Des-Pres, where you will enjoy a drink in the Café de Flore, where Picasso, Apollinaire and Sartre all imbibed liberally.

The farewell dinner will be at the literary temple, Drouant, where members of the jury for the Goncourt prize gather for dinner once a month.

After a leisurely moment shared with croissants and café au lait, you will part ways with your travel mates, but the memories will last a lifetime! 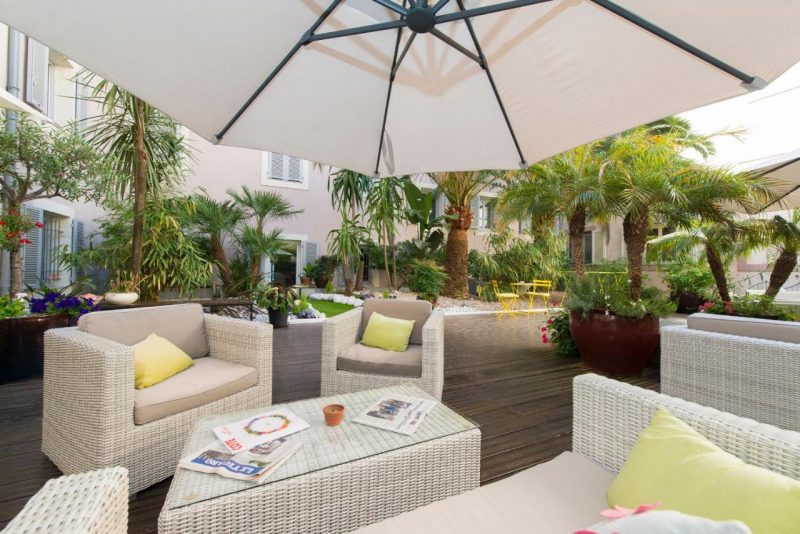 This elegant hotel was one of the first seaside hotels in Nice. At the time, it was a favourite of artists and intellectuals such as Matisse, Fitzgerald, Nietzsche and Chekhov.

Designed by Christian Lacroix and located in the heart of Arles in Provence, the Hotel Jules César offers a journey through time. Sublimated by 18th century elements and contemporary art, the hotel will transport you into a poetic world. The hotel boasts a beautiful outdoor pool and gorgeous spa. 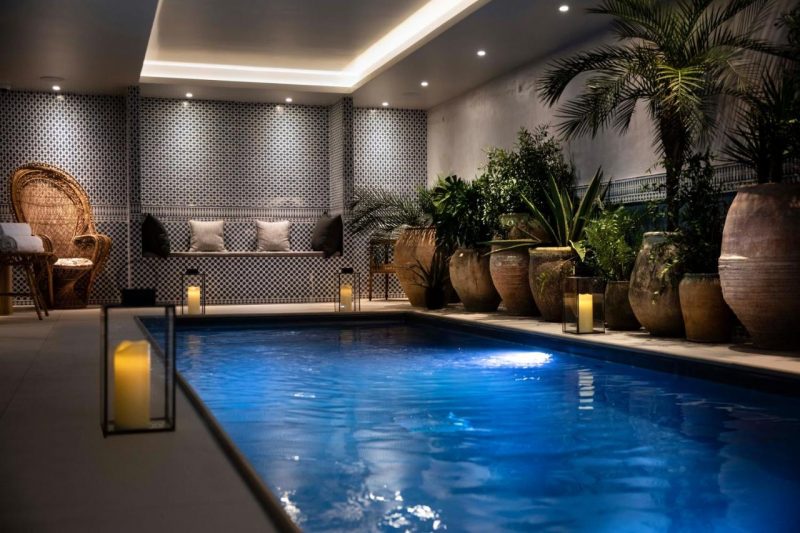 This boutique hotel, centrally located in the 5th arrondissement, was inspired by Alexandre Dumas. Mirroring the adventures of Edmond Dantes, the luxurious Hotel Monte Cristo showcases historical artefacts and objects from the Far East, trophies of Dumas, shimmering colours and fine materials – all of which contribute to creating an elegant yet welcoming cabinet of curiosities. The hotel also has a beautiful indoor swimming pool surrounded by exotic plants.

Want to Join Us?

Need help finding the perfect trip to join? Looking to create your own adventure?

Contact us anytime and let’s build your perfect trip together!

Looking to host, feature, or create your own retreat?

Let us help you plan or fill your group experience!

List your trip
2022 © Shefari. All right reserved.
Design by This Pure Project
Development & Support by RoundFloor